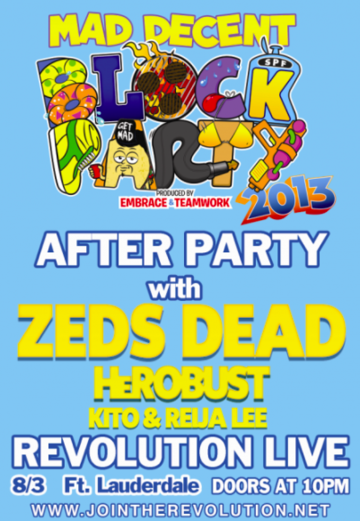 Although I missed the initial block party which started at 2pm, when I arrived 12 hours later the after party was slammin’ at 2am! The girls threw down a melodic, bass driven set that had the audience spellbound.

Next up was $uper Geniu$ who continued to rock the house until closing. $uper Geniu$ was created in 2008 when local South Florida DJ’s Supernaut and Jimi The Genius joined forces; creating and spinning low-end frequency vibes for bass lovers to get down to. As they rocked the vinyl, MC’s Jumanji & Disidente – repping Basshead Music, owned the microphone with hyped up motivation. I just couldn’t stop myself from dancing and was enjoying everything around me—there was nothing but great bass vibes all around! It was at that moment MC Jumanji turned to see me smiling and handed me the mic – how could I say no?! I jumped up on stage to join the boys and spit 32 bars of heated melodies and improvised rhymes. The crowds’ energy was beyond intense; it was a moment I’ll remember forever and a night I’ll never forget!

I thought my night had been crazy until I got chatting with Disidente. He had been scheduled to host the last two hours of the after party but ended up doing way more than what was planned! He started by hosting the opening of the indoor room, and then jumped on the decks to spin drum & bass for an hour and a half. Following that he spun at another party West of the event and then came back to host as originally scheduled from 2am-4am. I thought my experience was pretty intense, but this Puerto Rican’s experience took the cake!

I completely agreed with him when he stated that the night was stellar, despite the madness of it all. The energy was full force from start to finish and the attendees were a wide range of twerk-crazed ladies, fist pumping dudes and happy, vibrant faces. I thought it was a great sign of things to come in the future of the South Florida music scene. Like Disidente, my involvement in the Florida dance music scene has been heavily in drum & dass. After experiencing this sold out event, my eyes were opened to how much the EDM (Electronic Dance Music) culture has grown over the years and how the various forms such as drum & bass, dubstep, electro, breaks, trap are followed. The scene is like a rollercoaster ride where certain genres peak and reach their high moments only to plunge into low because listeners have moved onto “the next big thing”.

Disidente said himself “Miami is a very trendy city, with musical scenes that come in cycles. In five years, I see the scene taking it to the next level, with more live acts. I definitely see Drum and Bass evolving more into what it was, maybe even bigger…”

I agree with his statement and believe it’s already in the works. The Mad Decent Block Party was a wicked event and South Florida should be really excited for what’s to come. Bass in all forms bring the girls (and boys) to the yard!