Get Ready For CEREMONY 2014 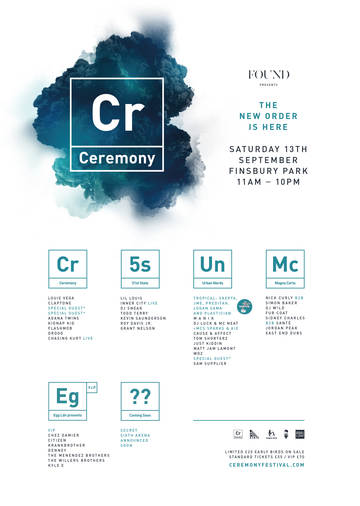 With the full programme for both festival and After Party now revealed Found presents: Ceremony explores 360 degrees of underground dance culture, looking to the past, present and future to present a stellar multi-arena celebration at Finsbury Park on the 13th September. Featuring the early influencers, the new school and the future vanguards of electronic sound, expert party starters FOUND will deliver an ideal way to round off the summer season with the likes of Inner City LIVE, Louie Vega, Lil Louis, DJ Sneak, Richy Ahmed, Claptone, DJ W!ld, Roy Davis Jr, Route 94, Nick Curly, Simon Baker, Todd Terry and many more…

Continuing the party over at Egg London, Ceremony’s after party will run for a colossal twelve hours running between 10pm 10am, across five rooms of music. A refined cut of the Ceremony line up, the marathon party will feature the firm FOUND favourite DJ Sneak, much loved for his gangster induced Chicago house that’s a sure fire winner on the dance floor. Also representing the US are the legendary Todd Terry and Roy Davis Jr, who will both serve up their unique take on house that seemingly paved the way for its predecessors. Crosstown Rebels mainstay Fur Coat will also feature, whilst Citizen, Simon Baker, Applebottom and The Menendez Brothers complete the line up. With very limited £13.50 tickets on sale now, the after party promises to be particularly special for those who like it longer, with Egg’s new outdoor garden terrace providing a stylish and unique party setting.

Building on FOUND’s reputation for hosting unforgettable parties, Ceremony has been expertly crafted to deliver the very best musical experience for its partygoers. Featuring a total of 7 arenas, line-ups for a further two stages of music have now been revealed with red hot west London promoters, So Fresh So Clean set to make their festival debut. After launching in 2013, close members of the FOUND family, So Fresh So Clean have rejuvenated the West London clubbing scene with their classic hip-hop and RnB jams from the 90s and double-ohs. Headlining the stage is Todd Terry, who will grace the turntables with his ground breaking underground sound that originally hit big in the UK before his native home of the US. A bastion of true, fresh house music, the Grammy nominated producer will play an exclusive old school hip-hop set that excellently personifies the So Fresh So Clean ethos, and is a must-see for those hoping to get that house party feeling. Having already amassed a fun loving fan base, the So Fresh So Clean residents The Menendez Brothers, Rollo and Remi, will get the gin and juice flowing and ensure the vibe never falters. Supporting acts include Dan Hills, Alex Crescent, Nite Sleaze, Hutch and Get Dippy, all offering a slice of London’s most cutting edge 90s infused beats.

The seventh and final arena will be hosted by legendary record label and promotion outfit Groove Odyssey. With deeply rooted ties tracing back to seminal figures of house such as Kerri Chandler, Joey Negro and Kenny Dope, Groove Odyssey are perfectly placed to complete Ceremony’s journey through sonic history and beyond. One of the most prolific house vocalists of all time, Robert Owens tops the bill for some throwback Chicago classics for what will undoubtedly be a memorable session. A FOUND boiler room set with the late visionary Frankie Knuckles last year proved he is a deft hand at conjuring groove inducing sets, and his performance for Groove Odyssey will be no exception. East end twins Bobby & Steve accompany the Groove Odyssey line up, famed for their soulful Garage sounding ‘Zoo Experience’. Next up is Paul Trouble Anderson, a mainstay of the London soulful house music scene for well over 25 years and renowned for his disco-infused, funky house that has rocked many a warehouse party. Fellow Londoner’s Phil Asher and Jazzy M will bring a hefty helping of vintage house music, whilst duo’s DJ Leo & Funky Smith and Joel S & Panther will take the musical journey through to the late 90s. Continuing to incorporate each sub genre of house is Kev Chase, with Randy Peterson & Yooks and David Bailey & Ted Lawrence completing Groove Odyssey’s legendary line up.

Found have also revealed fun-filled theme for their VIP arena which will be transformed into a jungle for the day. VIP tickets offer an extra stage of music, additional bars, seating area, luxury facilities and fast-track entry.