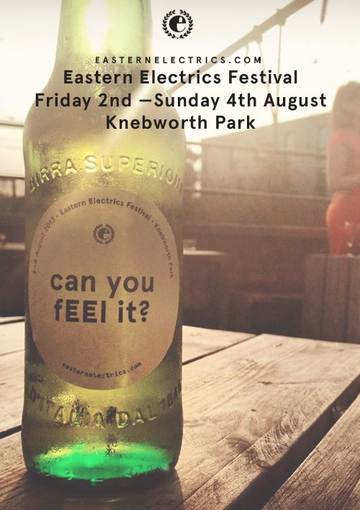 We came off the A1 and arrived at the spectacular grounds of the legendary Knebworth Park. With its acres of luscious greenery; I was amazed at the views. It was an absolutely great location for a festival…

On arrival, the box office was very helpful as have all the staff been at EE. I could already feel the festival buzz and I couldn’t wait to get amongst it. Despite the rain that had fallen the night before the party people were coming through gates in abundance.

The lineup for this year was absolutely out of this world with some of the major players in the house scene. Superb DJ/Producers Seth Troxler, Maya Jane Cole, Krankbrother,Kerri Chandler, James Priestly, Guy Gerber, Masters at Work and many more.

The atmosphere was certainly ‘electric’, as I made my way into the main tent the Eastern Electrics Stage. Miguel Campbell was throwing down some serious beats and the crowd was going mental. The tent was packed with pure nice vibes; everybody had smiles on their faces, hands in the air and were expressing themselves on the dance floor.

At the Krankbrothr Stage, Heidi had the crowd going out of their minds with her outstanding set, it was going off! I was looking forward to listening to Heidi as I’ve only heard her play live once in Croatia and only caught the last 20 minutes of her set; let me tell you something, she was absolutely bang on point (go on girl). She most definitely dropped it like she was hot, she was phenomenal!

Following Heidi was the amazing DJ/Producer Guy Gerber who also had the crowd going insane smashing his set to pieces.

I made sure I had a taste of each tent, beautifully managed and produced by the EE team! Every time I stepped into one of the tents I really couldn’t cope with fact that there was the most unbelievable tuneage blasting out, it was unreal.

I met some really cool people that I partied with and my overall experience was super, fantastic, great. I can’t wait for next year.
I give Eastern Electrics 10/10 location, 10/10 music and 10 /10 for every time I went to the ladies there were tissues!

The only negative of the whole event was I felt I missed out because I didn’t stay for the whole weekend…”don’t worry Ruby there is always next year”. Well done Eastern Electrics fantastic event.