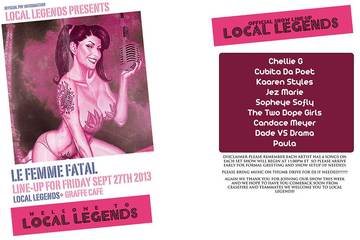 Chellie G was the special lady who started the nights live performances and captured the crowd with her blend of electronic R&B. Throughout the night, universal themes of love, good times, struggle and consciousness were found in each rhyme spat and every song sung. A wonderful mix of hip hop, R&B, acoustic funk and drum & bass took precedence for the night and an open cypher showcasing the ladies of the 305 added an even sweeter layer to the cake of memories made. As I (Sopheye) sang ‘Rush Me’ (a track produced by Brazil’s DJ Roots and released on V Recordings) I was so excited to be apart of all the positive energy that I kicked off my heels mid-set and had to break it down with my b-girl skills!
Fellow dancer and talented vocalist ‘Cha Cha’ had her fair share of moves during her soulful and funky The Two Dope Girls acoustic set with guitarist/saxophonist Katherine Osorio. Cubita Da Poet, Dade vs Drama & Kaaren Styles had rhymes for days while Jez Marie & Candace Meyer rocked their hip hop/ dance / R&B blends for the crowd to jam to. What made this event so inspiring was the fact that everyone involved emitted a unified and positive energy that defeated any typical music industry standard of having “haters be motivators”. Each performer greeted one another with respect, warm smiles and heartfelt welcome. It was refreshing as an artist to feel such positive vibes. We all have our own dreams and journeys; it’s just that much more rewarding when you encounter other artists who respect, motivate and believe you can succeed. It’s amazing what good intentions can create when everyone around you feels the same way.

Based on the night’s concept and success, the Local Legends crew has decided to continue the “fatale” series and host an all male show which will result in a battle of the sexes the 3rd Friday following the “Femme Fatal” showcase. The stakes are high and the competition will be fierce! For those of you who are unable to physically join in the epic evenings to come, be sure to keep it locked to the Local Legends show on UniverseMiami.com. Don’t miss out on any minute of the excitement!